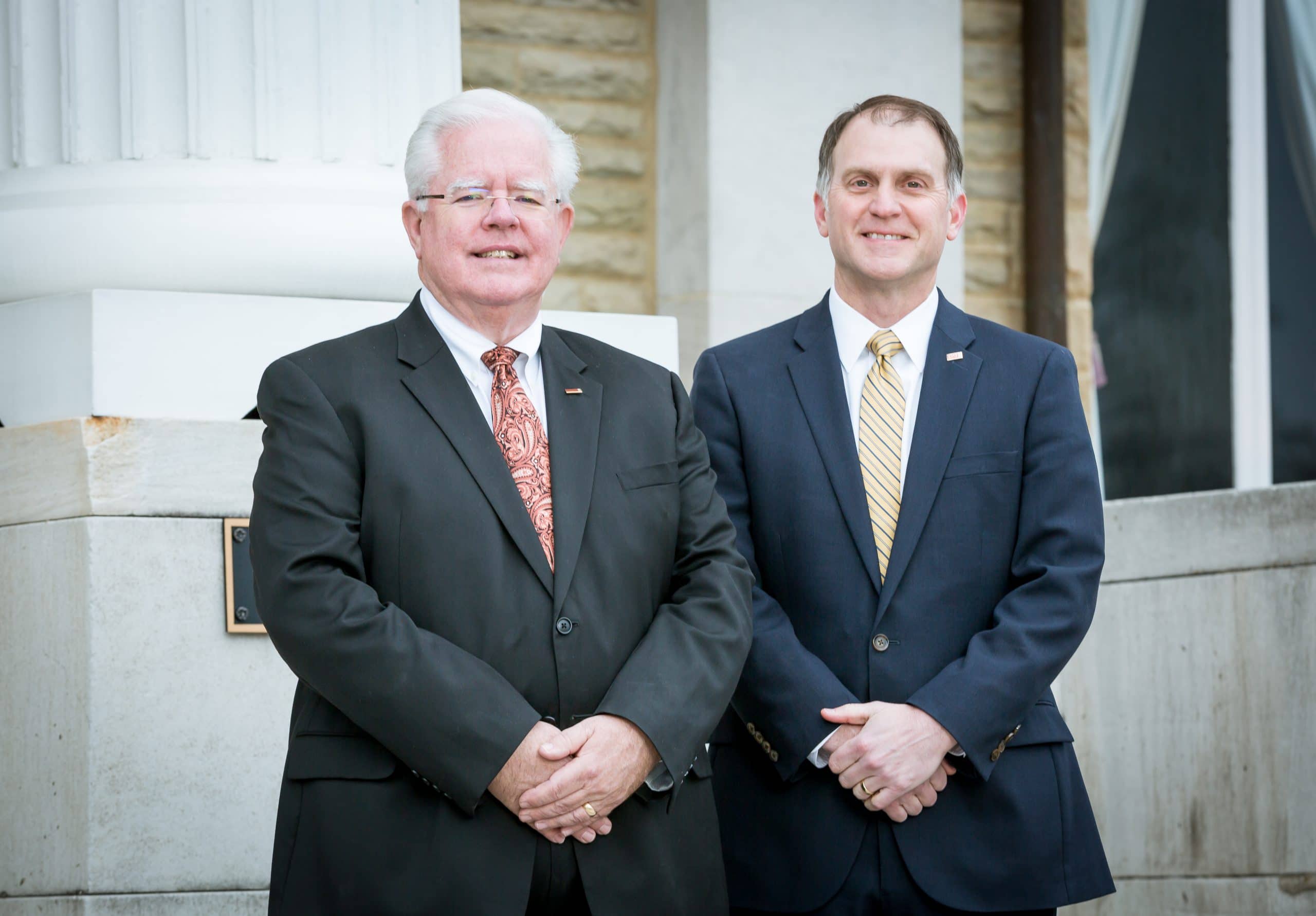 Wilson Bank & Trust CEO Randall Clemons (left) is set to retire at the end of the year and president John McDearman (right) will become the new CEO.

Wilson Bank & Trust’s transition to the next generation of leadership is the result of a well-planned, well-executed succession plan first announced in 2014. There were no search committees or outside consultants. There was no hand-wringing over whether to bring in an experienced outsider with fresh perspectives to take the helm.

There was just the steely focus of outgoing chairman and CEO Randall Clemons and former President Elmer Richerson to set their retirement calendars in stone, stick to the timeline, and ensure that the transition wasn’t disruptive to the bank’s culture, its business model, or the long-term plan to remain a growing independent bank.

When he retires at the end of the year, Clemons, 67, is ceding his chief executive title at the widely held private bank, which now boasts $2.7 billion in assets and a nine-county footprint with 28 full-service branches that includes the lucrative Nashville market.

“This is going to be John’s bank to run,” Clemons said referring to John McDearman, a Lebanon native who returned home from Chattanooga in 1998 to join WB&T, initially as a commercial lender and then as a branch manager.

“I’m not going to keep an office here,” Clemons said, “but I’ll still be involved in some business development and will be available to John if he wants to talk about anything.”

McDearman, who will assume the CEO position on Dec. 31, smiled. “I’ll have him on speed dial.”

The top leadership team was rounded out in early October when McDearman announced that longtime WB&T banker John Foster will succeed him as president at the end of the year. Foster began his career at the bank’s Gladeville branch office about the same time as McDearman came on board.

“John Foster has proven himself as a very capable leader and decision maker,” McDearman said, “and he is a natural fit for the president’s role.” He most recently was chief consumer and community banking officer, supervising the regional presidents in charge of each geographical region of the bank.

Getting the new leadership team in place is the culmination of a process that began in earnest five years ago. The top priority, Clemons said, was to avoid the pitfalls that some businesses experience when a change in the top leadership does not come with a smooth transition.

“Many times there’s a major change in the thinking philosophy of the next management group, and Elmer and I and the board didn’t want to see anything torn apart that’s been built up over these 32 years,” he said. “So we set out on a mission to make sure that didn’t happen, and we’ve accomplished that in selecting our incoming CEO and president. We know their beliefs are our beliefs, and we know they have the ability to take the bank to even greater levels than we’ve been able to.”

Clemons is well known inside the bank for being decisive, and he took that mindset into his decision to retire.

“As you get older and think about retirement, I’m a firm believer that if you don’t have a set date and time to do that, as it gets closer, you extend it out and extend it out. And we also felt that it was important that we have time to do the proper succession planning and, in John’s case, allow him to have time to work with me and Elmer, who decided to retire two years before me.”

When Richerson retired as president, McDearman was elevated to that position from executive vice president, and it was clearly signaled that he was the CEO-in-waiting. 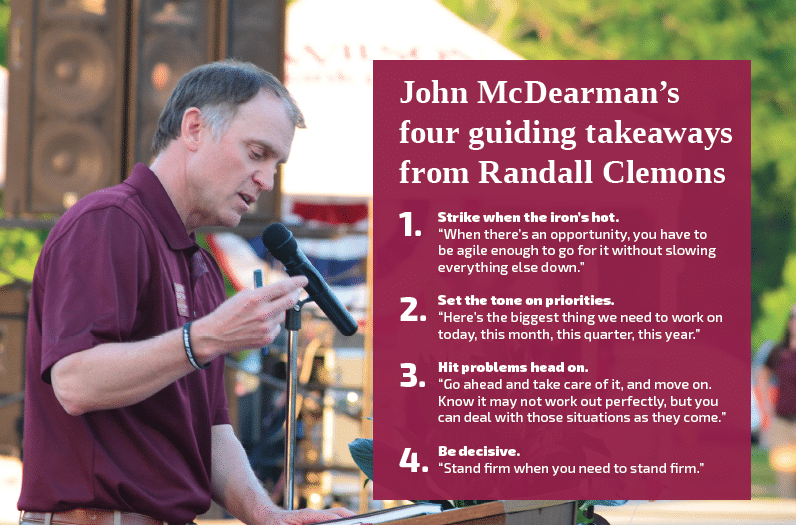 Clemons first met McDearman when he came to a visitation to pay respects to his father, John McDearman II, after his death in 1996. The elder McDearman was a well-known banker who worked for First Federal Savings and Loan, but Clemons didn’t know his son.

“He really impressed me, and as we were leaving the funeral home, my wife said, ‘You need to hire him.’ And that’s when the seed first got planted.”

McDearman says he remembers distinctly Clemons calling him “out of the blue” to ask if he was interested in working for a community bank. At the time, McDearman was a branch manager for Bank of America in Chattanooga. “My wife’s family was in Chattanooga, we really liked the area, and there was potential for advancement in my career. So we were pretty settled,” he said. But the idea of coming back home intrigued him.

“I came in to meet with the executives at Wilson Bank on a Sunday. As it turned out, the interview was much less about my skills than about who I was as a person, because that’s what they considered most important. That’s a unique perspective, and it made a real impression on me. I’m glad to say it’s a philosophy we still use now. That was a big reason I wanted to be part of this team, even when there were opportunities to go to larger organizations or bigger cities.”

For McDearman, 49, taking over Wilson Bank is the fulfillment of a longtime career goal to one day run a bank; but being able to do that in his hometown and with a bank he has deep admiration for makes it even more special.

“I remember before coming to work here being able to see the bank from a perspective of the heart. The bank hosted an event called Love Lights a Tree with the American Cancer Society that memorialized people that had passed away from cancer,” McDearman said.

“I got to experience their involvement in the community and the things they are willing to do for people that others are not. Being back home, I did realize the value of being in the community where you grew up and having so many people come up and say, ‘I know your mom or your dad or your sister, and the impact they made.’ And so I realized I was going to have a real opportunity to make an impact here.”

“But, I was never promised anything,” McDearman said. “Randall just gave me the opportunity, and from that point I felt like it was my job to take advantage of it.”

From Clemons’s perspective, there was little doubt the bank had found its future CEO, even before the five-year succession planning phase was revealed in 2014.

“We saw talent in John from the time that we hired him,” Clemons said. “And you try to look for talent and bring them into your organization and then you let them see what they can do with it. And John was able to excel. He was able to work with other employees. He was a known leader. He became involved in the community. He did everything that the CEO of the bank should be doing at some point. So he was a proven commodity.

“He was in the right spot at the right time,” Clemons said, “and by us being able to plan ahead and look internally at our different options, we were able to meet our goal of promoting from within.” 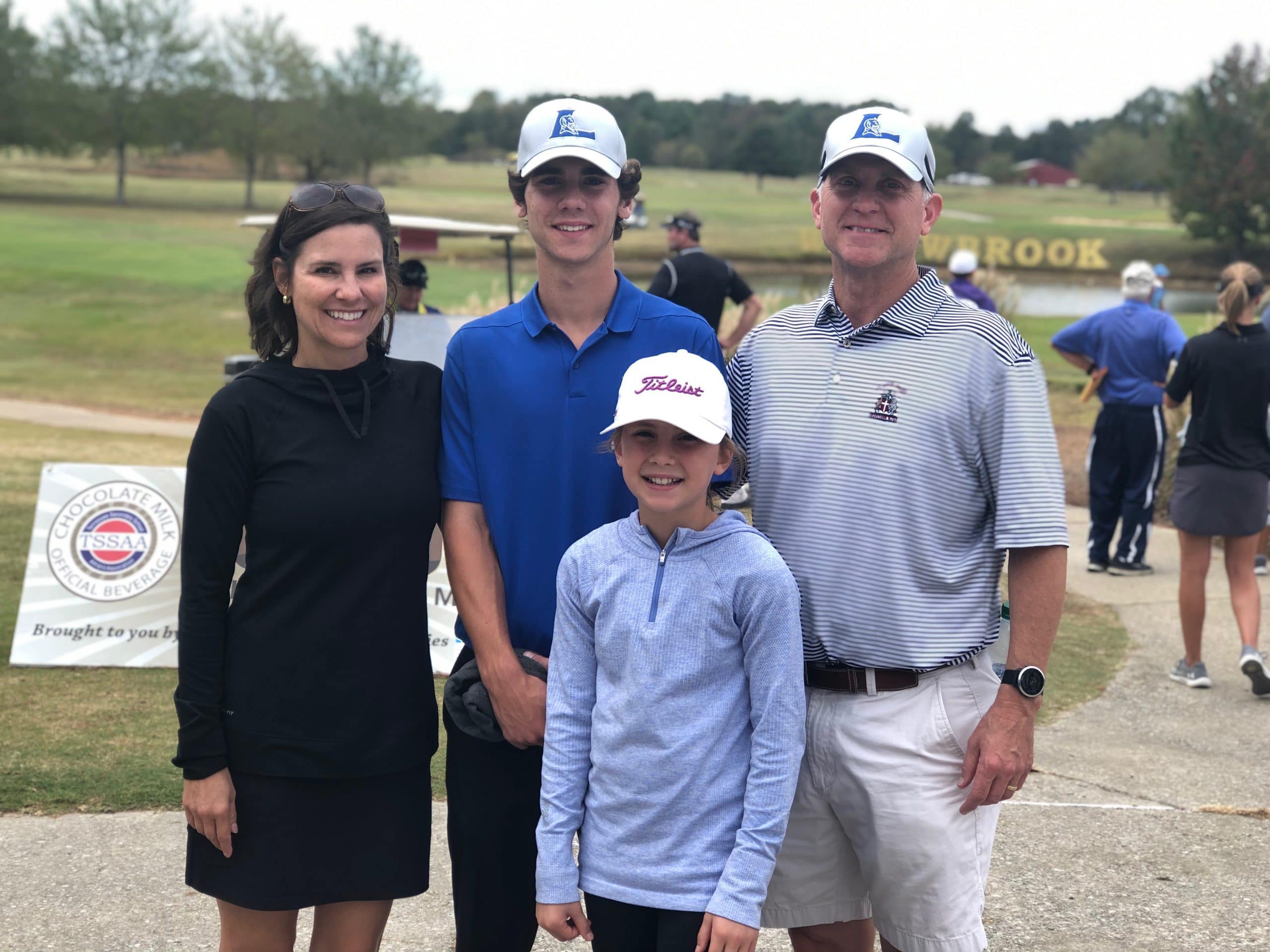 McDearman family, L to R: wife Kathy, children Mark and Mia, John McDearman (not pictured are his sons JC and Eli, both students at the University of Tennessee).

In addition to effecting a smooth transition of leadership, WB&T’s announcement of plans so far in advance was meant to calm any fears about the bank’s future that may otherwise have arisen from within important constituencies—namely the bank’s 500-plus employees, its customers, and its shareholders, which now total just over 4,300 (with none holding more than 3%). It was also meant to send a strong signal that Wilson Bank intends to remain an independent bank.

The extended time McDearman spent as executive vice president working alongside Clemons and Richerson, and then as president, also is allowing him to take the reins with a team intact and a ready-to-go operational plan.

“A big focus the past two years has been on getting the right people in right spots, to make sure we had the strongest management team that we could possibly have, and that we had a continuing strategic plan,” McDearman said. “And I’ve had the opportunity to see first-hand the way the bank’s history and our way of doing things have been totally ingrained in our people.

“This is what we do. This is how we do it. This is why we’ve been successful. This is what we will continue to do. Yes, we have to evolve as a company, like all companies do, but we know what our core is, and that is not going to change.