Day on the Hill

On August 10, 1960, a delegation of bankers met in the Hermitage Hotel in Nashville to organize a new division of the Tennessee Bankers Association. There was one goal—to groom future leaders of the banking industry in Tennessee.

The Young Bankers Division was created to nurture the professional development of the state’s young bank officers and prepare them to become the industry’s next generation of leaders. It provides a variety of educational opportunities for its members and promotes community awareness of the banking industry.

The success of the Young Bankers Division can be measured through the many leaders in the banking industry, local communities across the state, and the association itself who are products of these efforts. Since the establishment of the Division in 1960, a significant number of bankers who were active in the Young Bankers Division have advanced to become officers, directors, and committee chairmen of the TBA—direct evidence of the division’s continuing success in achieving its goal.

The Young Bankers Leadership Convention, typically held in April, is an opportunity for bankers to learn about current industry issues and to acquire leadership skills that will benefit them in both their bank and their community. The convention business program features professional speakers, the election of division officers, and multiple opportunities to build a statewide professional network.

The Young Bankers Division has been involved in increasing financial literacy and fiscal responsibility within their communities since 1962 when the division first initiated an aggressive campaign to assist teachers in broadening the public understanding of banking. The Young Bankers Division coordinates Tennessee Financial Literacy Week, a weeklong campaign whereby bankers reach out to students from kindergarten through college, civic and business organizations, and other consumers to help them understand personal economics and money management.

Day on the Hill

Each March, the Young Bankers Division organizes a day at the state capitol. Day on the Hill encourages engagement in the political and regulatory process which ultimately dictates the business climate of Tennessee and its communities. The program gives young bankers the opportunity to observe the General Assembly in session in Nashville. Participants meet with legislators, learn about the processes and procedures of the state’s governing body, tour the Capitol, and attend committee sessions.

Each fall, the directors of the Young Bankers Division host a series of Leadership Luncheons across the state. The luncheons provide bankers an opportunity to network with their regional peers. Each luncheon features a local member of the General Assembly as a guest speaker who updates attendants on the current political landscape and priority issues. 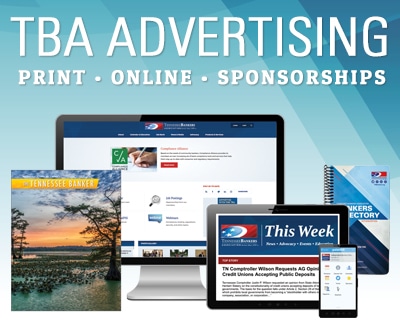