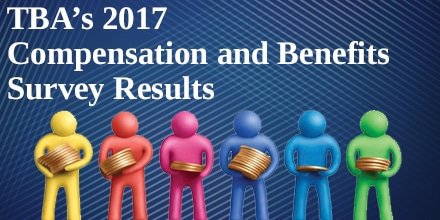 A new survey of bank executives suggests that bankers in Tennessee could be experiencing slightly lower employee turnover rates and slightly less upward pressure on salaries than their counterparts elsewhere. Nevertheless, the competition for talented employees is likely to remain strong in the near term.

Every year, Crowe Horwath LLP surveys financial services organizations throughout the United States about compensation trends, benefits, incentives, and other human resource issues. The responses to the 2017 Crowe Bank Compensation and Benefits Survey show that employee salaries and turnover rates are still rising, continuing a multiyear trend. While Tennessee banks are subject to the same factors that are driving salaries higher nationwide, responses from survey participants in Tennessee suggest that the effects might be slightly less pronounced in The Volunteer State.

One of the most noteworthy trends in the 2017 Crowe survey relates to banks’ overall employment strategies. For the first time since the 2008-2009 recession, more than half (54.9 percent) of the national survey respondents reported they planned to increase staffing levels during the coming year, either in response to normal growth (41.7 percent) or as a result of expansions or acquisitions (13.2 percent). The responses from bankers in Tennessee were comparable, and with a total of 53.8 percent reporting they expect to increase staffing levels over the next year. (See Exhibit 1.) 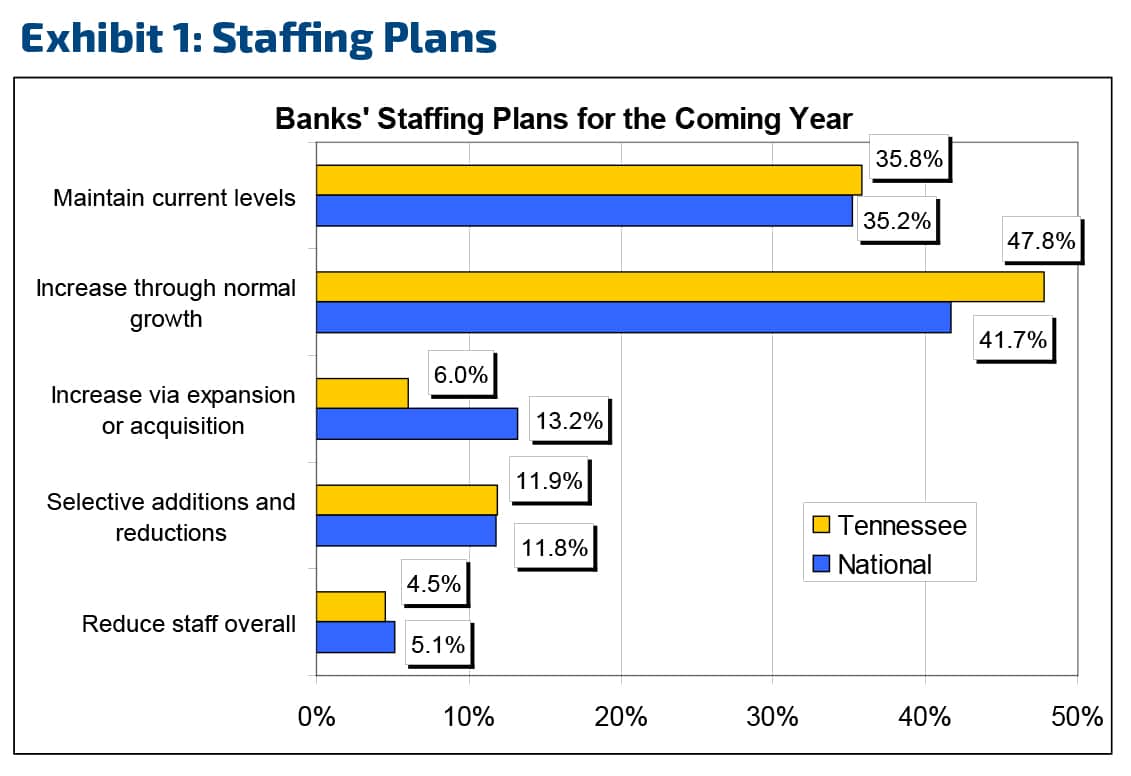 In addition to expected employment growth, other survey responses also suggest the general upward pressure on salaries is continuing. For example, average employee turnover rates in the national survey climbed for the third consecutive year in 2017, reaching their highest levels in more than a decade—7.3 percent average turnover for officers and 18.9 percent for nonofficers. 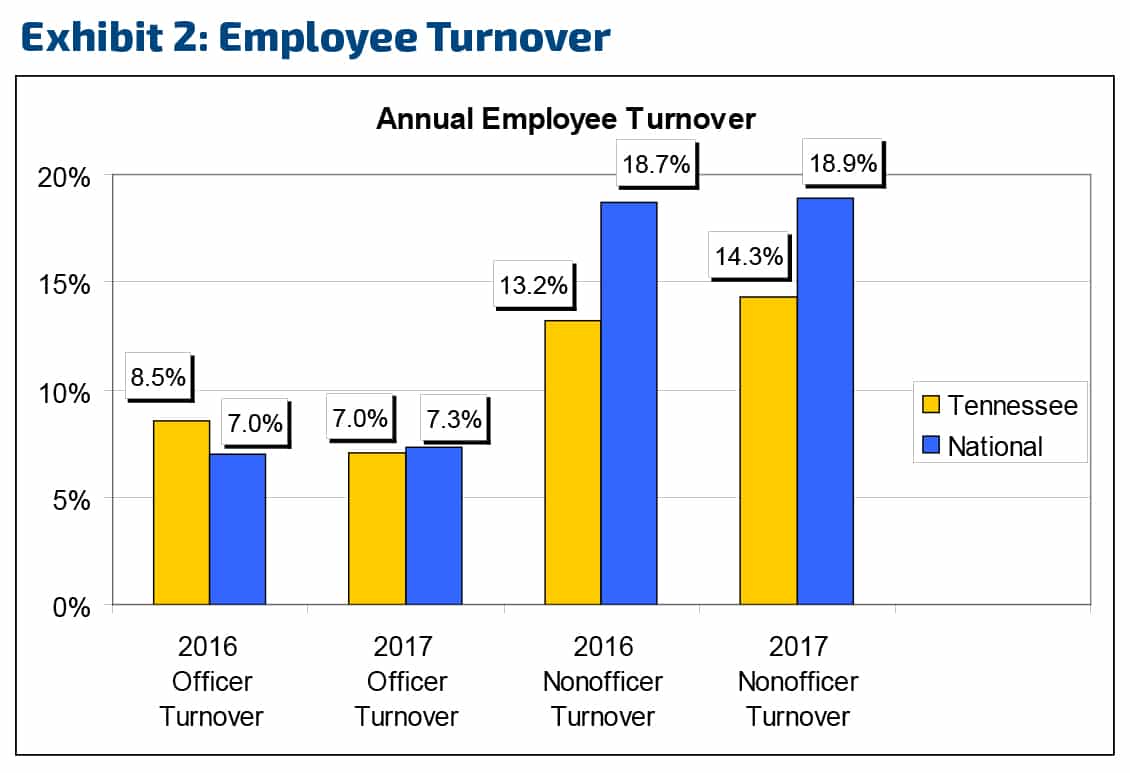 Although the lower nonofficer turnover rates in Tennessee could be interpreted as an encouraging sign, it is important to remember that employee turnover rates in general remain at historically high levels, which suggests upward pressure on salaries is likely to continue.

Nationally, the number of banks that reported using an above-market compensation strategy declined very slightly in 2017, while the number who planned to stay near the market average increased by almost the same amount. This reversed what had been a strong four-year trend and could be seen as another indicator that bank executives are sensing a stabilizing labor market.

Among Tennessee bankers, however, the opposite trend was noted. The number of Tennessee respondents using above-market compensation strategies increased slightly in 2017, while the number planning to stay near the market average declined. (Exhibit 3.) 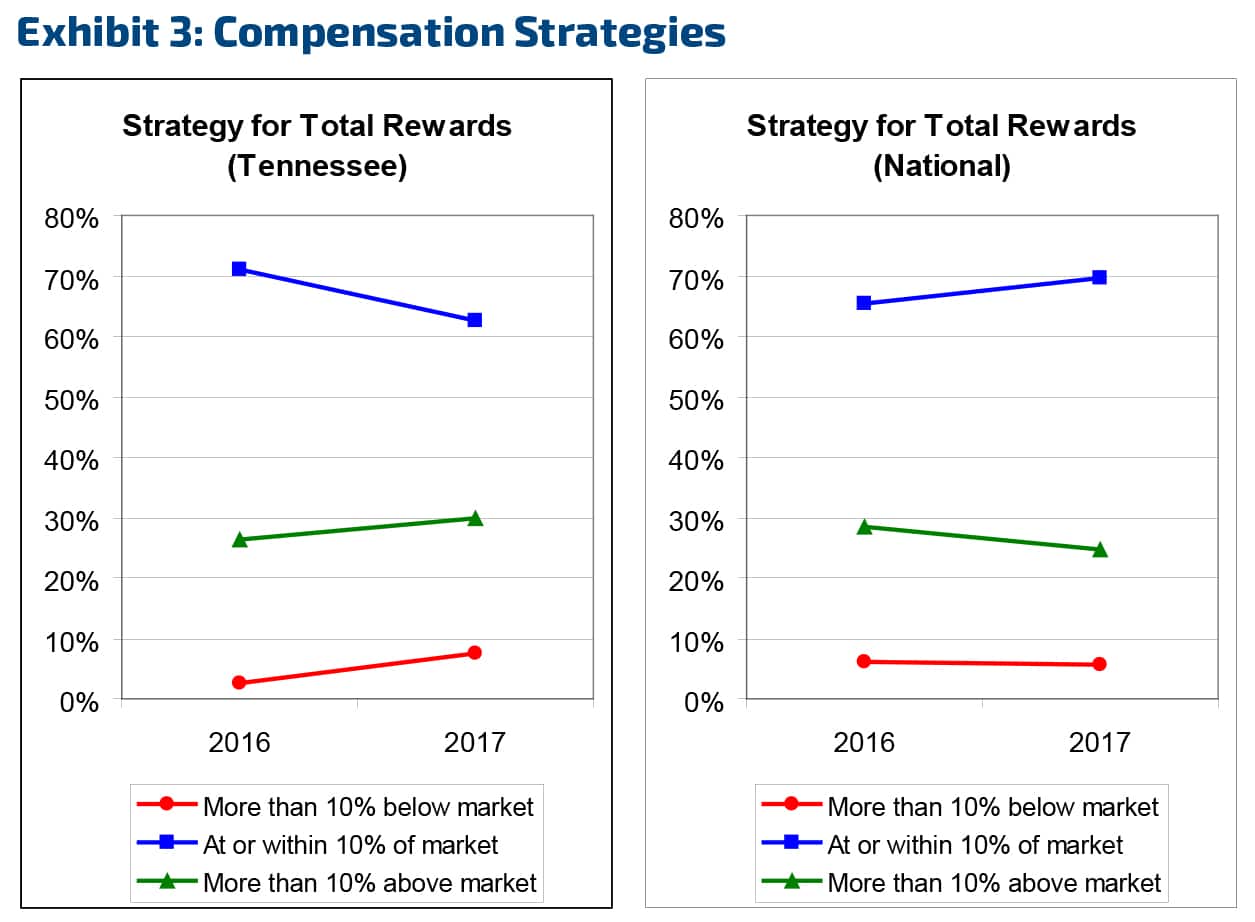 Finally, it should be noted that the upward pressure on salaries is particularly noticeable in the C-suite. According to the survey, the average total compensation packages for many senior-level bank executive positions in Tennessee rose sharply from 2016 to 2017. (Exhibit 4.) 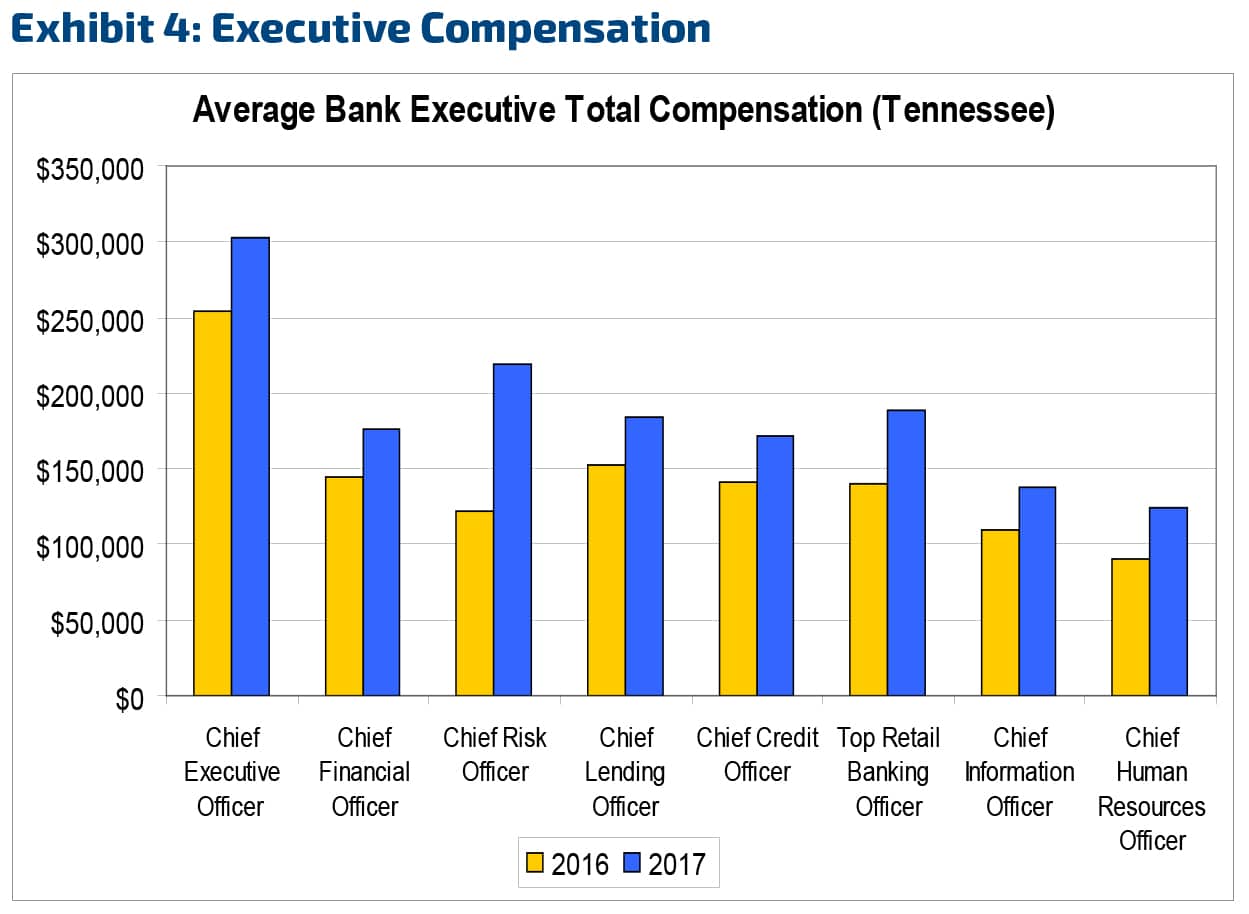 Overall, the survey findings suggest that the market for productive bank employees—both nationally and in Tennessee—is likely to remain competitive for some time to come. Banks should be prepared to revisit their compensation strategies regularly to stay abreast of new developments.