Chairman Holmes is up for the challenge 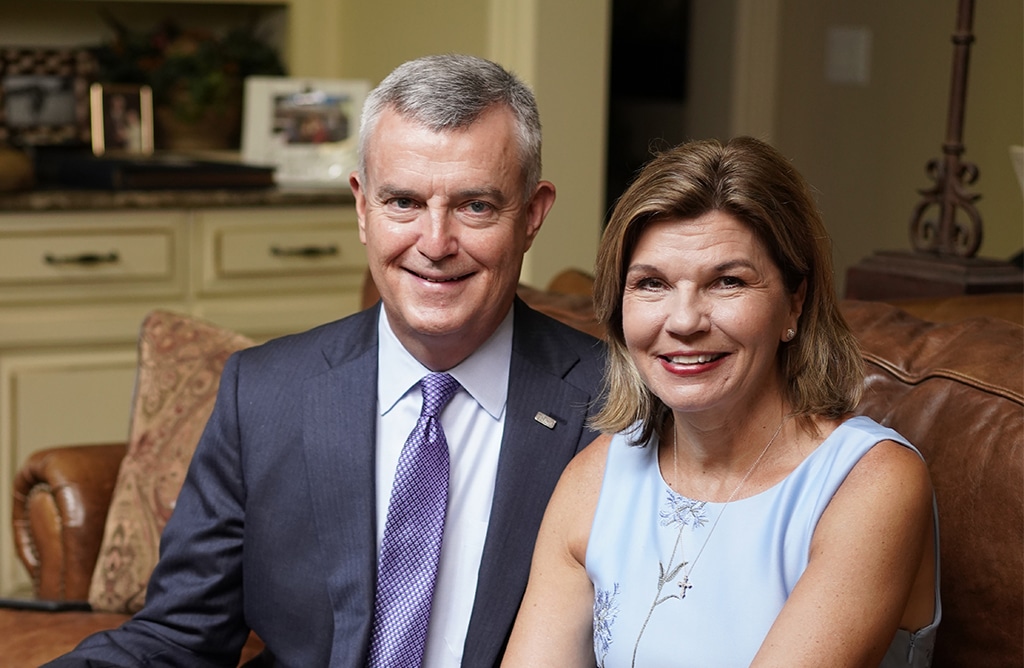 FirstBank President and CEO Chris Holmes knows his year as chairman of the Tennessee Bankers Association is going to be much different from the one he was planning just a few months ago.

In another time, he would have gotten the traditional gavel handoff at the Annual Meeting from outgoing TBA Chairman Mott Ford, his friend and a former colleague during their days at the National Bank of Commerce in Memphis. He would have addressed the membership in person and received the congratulatory handshakes. And as a longtime champion of financial literacy, he would be making the TBA’s outreach initiative in that area a priority.

The COVID-19 pandemic has changed all that, of course, and now Holmes is geared up to play a key leadership role in the banking industry’s ongoing response, working hand-in-hand with the board and TBA President Colin Barrett to help banks across the state deal with the continuing fallout. He knows the challenge ahead will take center stage.

“The toughest times for the banking industry are still in front of us,” Holmes said, adding that the crisis has magnified the TBA’s importance. “I think the response of the TBA has been spectacular, and I don’t think it has gotten the credit it deserves at this point. The leadership of Colin Barrett and his team and Mott Ford on the response could not have been any better if we had been practicing for it three times a year for the last 20 years.”

From Biology to Accounting
Like many bank CEOs in Tennessee, Holmes didn’t have his sights set on a banking career when he left his hometown of Lexington, Tenn., to go to college at the University of Memphis. He wasn’t even a business major.

Two-and-a-half years in, Holmes was well on his way to getting a pre-med degree in biology at the University of Memphis when he came to a realization—he didn’t actually enjoy what he was studying. Although he did “pretty well,” Holmes said he didn’t like the classes or the labs. Breeding fruit flies. Zoology. Organic chemistry. In fact, he says, “I hated them.”

He decided to pivot after taking an Economics 101 class as an elective. “I loved it, and I did really well in a course that many people struggle with. I was thinking, ‘This is easy.’ It just came so natural to me. As soon as I finished that course, I changed majors.” Two years later, he graduated with a BBA in accounting.

At the time, his goal was to return to Lexington to work his way back into the family car business. His father, Charles Thomas Holmes, known by all as “Tommy,” owned the local Ford dealership, which was started by his father in 1934 with some financial backing from his grandfather.

“My father was not what you would consider to be the typical automobile guy,” Holmes said. “He was very reserved.” The elder Holmes also had a policy for his three sons and daughter that did not allow any of them to go to work at the dealership directly.

“We all had to get a college degree and go to work somewhere else. Later on, if we wanted to, we could look at coming back into the business. None of us did, although my younger brother who is an engineer did come back to help run the dealership when my father’s health started to decline.” (After 74 years in business, the family sold the dealership in 2008; Tommy Holmes died in 2014.)

Road to FirstBank
After graduating from college in December 1986, Holmes passed the CPA exam and landed a job at the accounting firm Ernst & Young in Memphis, primarily doing audit work. It didn’t take him that long to come to another career-changing realization—while accounting gave him a great business foundation, and he enjoyed what he was learning, the people around him and his clients, it was not what he wanted to do.

He decided to take an opportunity to get into banking when he was recruited by a former Ernst & Young colleague, John Presley, to succeed him in the finance area at National Bank of Commerce. Presley had been named president of NBC’s subsidiary, National Commerce Bank Services, which provided consulting services to banks around the world in setting up bank branches in retail stores, a concept pioneered by NBC’s Thomas Garrott.

Holmes later joined Presley at NCBS in a business development role and eventually succeeded Presley as president when he left to run another company. Two members of the team were Mott Ford and Mary Call Proctor (who would become Ford’s wife). They all traveled extensively in those years during which Holmes worked with banks in 41 states and 12 countries, mainly in South America, Europe, and Canada, and gained valuable insight into the differences in the way banks operate, especially those in other countries.

After his time at NBC, which was acquired by SunTrust in 2004, Holmes was named president of Trustmark National Bank’s North Region, serving as president of Memphis Community Bank while also supervising five community bank presidents.

It was a big move for Holmes and his family—his wife, Susan, a Memphis native that he met during his freshman year at UM, and their three young daughters, Hayley, Hannah and Hope. “It was really leaving home for both of us,” he said, “but we had a great experience. We loved Greenville.”

Holmes was brought in to South Financial, which was struggling at the time, to help the bank establish a stronger retail component. When the board dismissed South Financial’s chairman and CEO, they encouraged Holmes and a couple of other top executives to stay in their jobs and consider applying for the CEO position. They also looked outside. Holmes threw his name in the hat, but was not hired.

“I was very disappointed at the time, but in hindsight the board was smarter than I was, and it was the right decision. That coincided with me getting a call from FirstBank. They said, we need to talk to you about coming back over this way.” Later, FirstBank Founder and Executive Chairman Jim Ayers called Holmes and invited him to lunch or dinner the next time he came back to Lexington. Ayers knew Holmes’ family, but Chris had never met him.

They met, and Holmes found his perfect fit. He joined FirstBank as chief banking officer in 2010 as part of an executive succession plan, was promoted to president in 2012 and had the CEO title added the following year.

Not a Marketing Tagline
In the years since, Holmes and team set a course to become an elite community bank. When he joined the bank, its assets were at $2 billion. Today, assets are $7 billion and are poised for continued growth.

While those acquisitions added substantially to FirstBank’s asset size and deposits, much of the growth has been organic, which Holmes attributes to the bank’s decentralized community-banking approach it takes in each of its markets, large and small.

“We are 100% completely committed to community banking. It’s not a marketing tagline. A big driver of our success is that most members of our executive team are from small towns, like me, and have an understanding of what true community banking is. “We are not interested in asset size; we have never set a goal for that. Our goal is to be the best community bank in every community we operate in.”

Another key component of that lies in FirstBank’s evolving training program, what it calls talent development. The ultimate goal is to develop associates to exercise judgment and discretion at the customer level.

“We don’t want them to have to ask, we want them to be the decision-making point of contact. And to be able to do that, you have to understand the goals of the organization, the risks, how we make money—you have to understand things in a broader way than most folks are getting trained up in banking today,” Holmes said. “Not that the way other banks are doing it is bad. It’s just not the way we do it.”

Holmes has led FirstBank with a management style he describes as “inclusive.” For him, that means more presiding than directing. It’s about collaboration in coming up with the best way to solve a problem or reach a goal.

As the TBA continues to play a vital role in the banking industry’s ongoing response to the COVID-19, Holmes says collaboration will be more important than ever. And he is looking forward to the time when members can get back together face-to-face. “It’s something I have missed personally, and all of us have really missed. I think we are looking for that opportunity, even if we have to think about it differently." 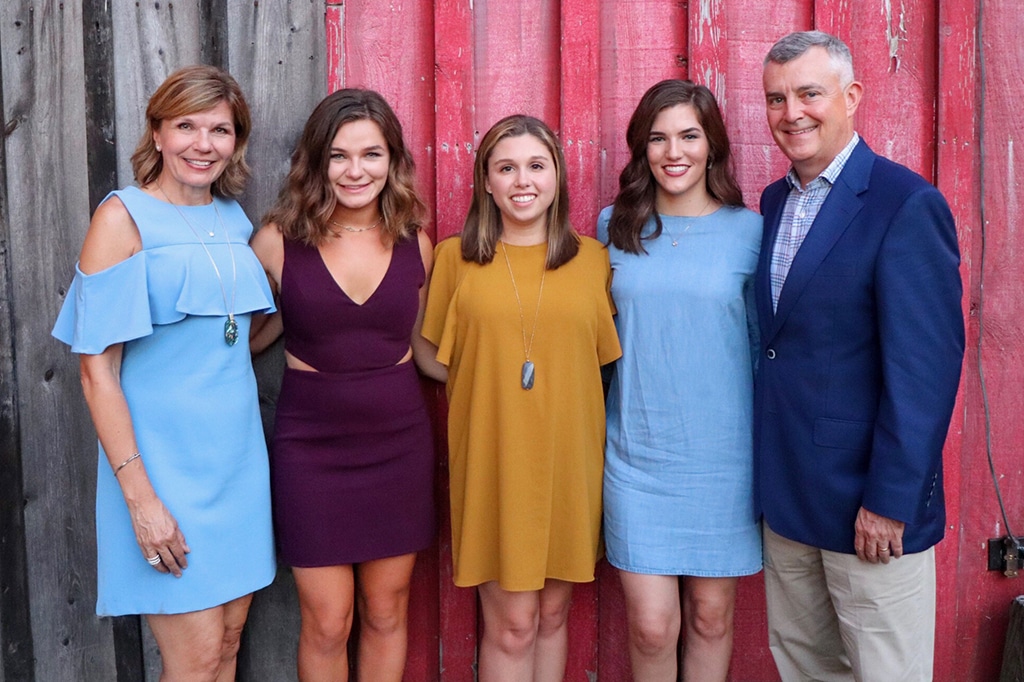 Family Guy
Like most bank CEOs, Chris Holmes does not have a lot of spare time; but when he does, he prefers to make that family time, whether it is at home, boating on Beech Lake just outside of Lexington, running in the New York City Marathon with his wife and a daughter, or vacationing here and abroad.

Chris and his wife, Susan—his college sweetheart who worked in retail management in Memphis before she became a stay-at-home mom—have three daughters, each of whom have distinct career interests. Hayley, 25, is a Belmont University graduate who is pursuing a second degree in animal science/veterinary technician at UT-Martin; Hannah, 23, a UT-Knoxville communications graduate who is working at a Nashville PR firm; and Hope, 21, a rising senior at Hofstra University in New York, where she is studying theater arts with a performance concentration.

Asked to name his top vacation spot, Holmes says: “Anywhere with my family is great, but my all-time favorite place is London—there is just so much to do, see and learn about.”