Newly Elected Vice Chairman and Directors of the TBA 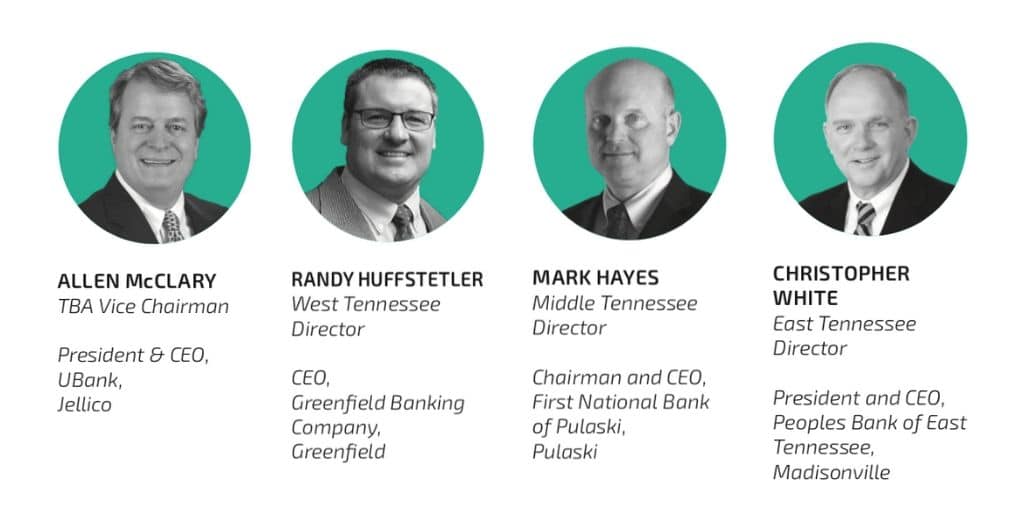 Allen McClary is the president and CEO of UBank in Jellico, Tennessee, a $65 million bank located on the Tennessee—Kentucky border in East Tennessee. After graduating from the University of Tennessee, McClary joined UBank fulltime in 1984 and has been president since 1995. McClary is a 1990 graduate of the Graduate School of Banking at LSU and has served as city councilman, president of the Campbell County Chamber of Commerce, and Chairman of the Board of Jellico Community Hospital. He currently serves on the boards of Seeds of Hope Food Pantry, Springs of Life Addiction Recovery Center, and spearheads Gem City Proud—a downtown revitalization project in Jellico. He and his wife, Diane, have two boys, Matt and Jake, and enjoy spending time with their granddaughters Myli, Cali, Bentley, and Ava Grace, and grandson Easton.

In my first job out of college, well before the days of computers, I was so impressed with my supervisor because he always had the right answer to any question.  When I asked his secret, he replied “You don’t have to know the answer to every question—you just need to know where to go to find it.” Of course, today that is Google.

From a CEO perspective, I would definitely recommend the CEO Forum, a great way to learn from your peers.

Randy Huffstetler serves as the CEO of Greenfield Banking Company, a bank just over $60 million assets headquartered in Greenfield, Tenn., where he graduated high school. Randy has worked at the bank since 1999, after spending 5 years right out of college at Terra International. Randy is a graduate of University of Tennessee at Martin, and later graduated from The Southeastern School of Banking. He and his wife of 23 years, Sherri, have two children, Abby and Grant.

The best advice I’ve received for banking and my career is: Treat people the way you would want to be treated, and if you support your community, they will support you.

The TBA event that I would say is a must attend would be theCredit Conference.  It is an awesome summary of the TBA and the relationships this great organization has, with their members, regulators, and vendors that support our industry.

Mark Hayes is the chairman and CEO of First National Bank of Pulaski, an $850 million bank serving three counties in southern middle Tennessee and two counties in Alabama. Hayes got his start in banking early on as a college student intern working three summers with the Farm Credit System before obtaining his B.S. in agriculture and MBA with a concentration in finance and management, both from the University of Tennessee, Knoxville. After graduation Hayes entered banking, working for First American National Bank and Commerce Union before joining First National Bank of Pulaski in 1991 as a loan officer. Hayes and his wife, Cindy, have two children. His son, Brian, works as a commercial airline pilot and daughter, Sarah, is employed by Truxton Trust.

The greatest advice given to me was not through words but through actions demonstrated each day by Mr. Parmenas Cox. Mr. Cox went to great lengths to make certain every customer, employee, and guest to First National Bank was made to feel and know that they were valued as individuals.

Chris White began his banking career in 1983 after graduating from Tennessee Wesleyan College and has spent the majority of it working in community banks. White has served Peoples Bank of East Tennessee as president and CEO for 18 years. The bank started in 1997, and now has total assets of $217 million and offices in Monroe, McMinn, Loudon, and Polk Counties in Tennessee and one in Fannin County, Ga. He is a graduate of The Southeastern School of Banking as well as all of the lending schools offered by the TBA, along with The Graduate School of Banking at LSU class of 1997.  He and his wife, Tonya, have been married for 32 years and have three daughters, Sara, Mei Lia, and Ciana.

I have been blessed with several great mentors over the years, but one that I had early in my banking career who helped form many of my thoughts about community banking is Tom Tuck. Tom always took advantage of every teachable moment and he enjoyed sharing his knowledge and experience in banking.  As president and CEO, I try to mirror his willingness to help others to become better bankers by sharing and mentoring them and doing all I can to prepare them for a successful future in community banking.

This is a great question, but a difficult one because there are so many great opportunities with the TBA for bankers and their financial institutions. If I had to narrow it down, I would encourage them to participate in the Washington Conferenceto experience how the TBA leads an impressive number of Tennessee bankers to the hill each year to meet with lawmakers and regulators and further the cause for banking through a collective voice.