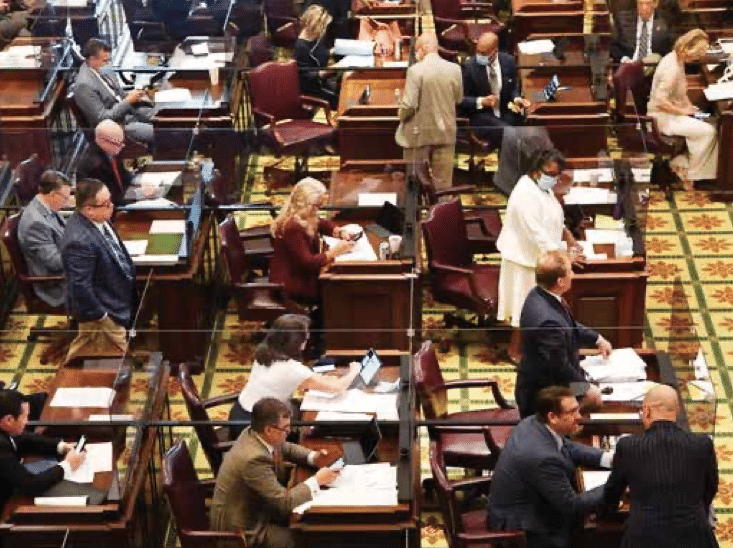 The word “unprecedented” has been used countless times in the past few months. Yet, there really is not a more appropriate word to describe the final month of the 111th General Assembly.

When House and Senate members returned in June following their two-month recess, they took entirely different approaches on the business to be conducted. The Senate primarily stuck with their plan to take up bills related only to coronavirus, the budget, or ones designated as time-sensitive. The House, on the other hand, picked up where they left off in March, taking up all remaining bills.

That meant TBA, like other trade groups, was lobbying House members on bills that would likely not move in the Senate. The House unanimously passed our legislation to update the state’s trust laws, and although it didn’t move in the Senate, it is in final form and can easily be filed for introduction again in 2021. Our legislation to increase the homestead exemption to $35,000 also did not move because of the Senate’s limited actions, but it will certainly be an issue to be addressed again next year.

We were also successful in amending the construction industry’s legislation to address contractors’ delayed payment issues, which put us at a neutral position on the bill. Our amendment addressed situations where a developer fails to timely pay retained funds. The construction industry wanted to allow contractors who were owed but not timely paid retained funds to seek legal relief directly against the bank holding those funds, despite the bank only serving as escrow agent. But, as amended by TBA, courts can issue orders directly to banks holding those funds if it determines the money is owed, but no legal action may be sought against the bank. This achieves the contractors’ goal of creating an avenue to receive payment without subjecting banks to new forms of legal actions.

The amendment also clarifies terms we agreed to in requiring banks to set up retainage accounts when they build their own facility or takeover a project in default and intend to complete it.

Once all parties to the legislation agreed to final language and the Senate determined this was time-sensitive legislation, the bill moved easily through the House and Senate.

Another issue we engaged heavily in during June was legislation brought by a coalition of 30 trade groups and businesses led by the Tennessee Chamber to protect businesses from frivolous lawsuits related to COVID-19.  As Senator Mike Bell, the sponsor of the bill, said while presenting the bill in committee, this was potentially the most important piece of legislation the General Assembly took up this year.

Unfortunately, the legislation—the Tennessee Recovery and Safe Harbor Act—did not pass prior to the General Assembly adjourning at 3:00am on June 19th. Members were still working out final details and taking votes at 2:00 am, with the main point of contention being when the legislation should take effect. The Senate remained steadfast with the business community’s desired effective date of March 5th, the date of the first confirmed COVID-19 case in Tennessee, while the House wanted a date in early April or later.
The bill, which passed with differing effective dates in the Senate and House, was presented again on the House floor with the March 5th date, it failed by a vote of 46-36-6.

Because the General Assembly adjourned just an hour after that vote, the Governor would need to call a special session to bring lawmakers back to Nashville and take up the legislation again. Governor Lee has expressed interest in calling a special session, but no announcement of such was made as of June 30.

We were incredibly frustrated with such a disappointing outcome for legislation that had widespread support and will continue working with the business coalition to protect businesses from frivolous lawsuits related to COVID-19.

We will now also focus on the upcoming elections and preparing for the next legislative session in January.  We’ve begun reaching out to members to help deliver BankPac checks to candidates, gain insight on contested elections, and determine what issues we should prioritize in 2021. If you would like to help in these efforts, please let me know.