It was just one year ago that I wrote on the outlook for the 2019 legislative session. I emphasized that it would mark a “new era in Tennessee politics” given that a new governor would take office and there would be historic turnover and new leadership in the state senate and house.

I spent a lot of time last year talking to bankers about how the elections and new leadership could impact the banking industry. All of the expected changes were positive, and we entered the 2019 legislative session in a good position.

However, no one could have foreseen that less than one year later, the House of Representatives would undergo another significant overhaul. But that is exactly what happened. For anyone who doesn’t closely follow politics at the state level, Rep. Glen Casada (R-Franklin) was elected by his fellow members as Speaker on January 16, 2019. After scandals broke shortly after the session ended in early May regarding his and his staff’s conduct over several years, the House GOP took a vote of no confidence on May 20, and he resigned his speakership on August 2.

Prior to his resignation, in late July, the House GOP caucus met and elected Cameron Sexton (R-Crossville) in a six-way race, to be their speaker nominee. Sexton was elected by the full House of Representatives during a special session on Aug. 23. His election meant he had to vacate his position as the GOP Caucus Chair, which opened the door for Jeremy Faison (R-Cosby) to serve as his successor. 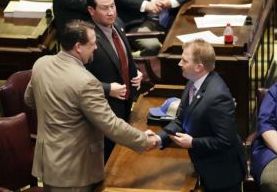 Speaker Sexton serves as the business development executive for the Bank of Putnam County, a position he’s held for as long as he has served in the House. Both Leader Lamberth and Caucus Chair Faison have strong relationships with their local banks, with Lamberth being encouraged to run for his current House seat by local bankers.

As a banker himself, Speaker Sexton has a solid understanding of the issues that face the banking industry and of the unintended consequences that could result from well-intended but potentially problematic legislation. We’re proud to see a banker serve in such a high capacity and look forward to seeing him serve as Tennessee’s next Speaker of the House.

It’s also reassuring to know that with Reps. Lamberth and Faison in leadership positions, a banker is just one phone call away to someone in leadership on key issues. All have been responsive and supportive on critical legislation in the past, and with continued support, the TBA will begin the 2020 legislative session in a solid position.

But that is not only because of those in leadership. The strength of the banking industry on Capitol Hill is also directly attributable to the relationships bankers across the state have with their legislators. That has become more apparent than ever the past few months as we have traveled the state to meet with bankers and legislators in their districts.

Visiting in the district offers a unique experience and allows us to get to know legislators in an powerful and memorable way, which improves our ability to maximize our visits during the hustle and bustle of the session. We appreciate every banker who’s willing to take time out of his or her day to allow us the opportunity to do this. For anyone we haven’t visited yet who would like to host us and your legislator, we would welcome that opportunity.