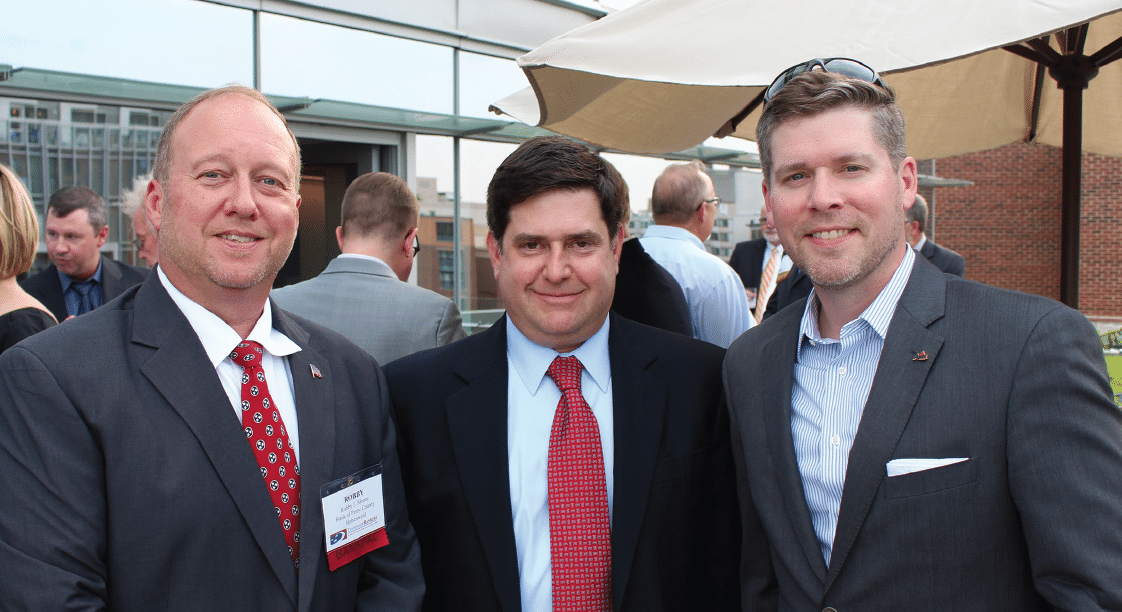 (Right to left) Matt Daniels is seen with Mark Miller and Robby Moore at the 2018 TBA Washington Conference in D.C.

The son of a minister and public school teacher from Crossville, Matt Daniels began working as an intern at the home of billionaire Jim Clayton, installing irrigation at age 18 while attending the University of Tennessee. Daniels joined Clayton Homes as a management trainee after graduation. Three years later, Clayton purchased First State Bank in Henderson, Tenn., and named Daniels COO. In 2004, at age 27, he was promoted to president and CEO. While opening its first offices in Knoxville in 2005, the bank was renamed Clayton Bank & Trust, and Daniels became the youngest president of a bank larger than $300 million in assets in the nation. Matt purchased 50% of Bank of Camden in 2008 becoming equal partners with Clayton in a new venture. Under his tenure, the Bank of Camden—now Apex Bank—has increased total assets from $160 million to $580 million while expanding to 15 offices across the state.

The Independent Bankers Division Board of Directors is responsible for designing the programs for the TBA’s Community Banking Conference—formally branded as the Independent Bankers Convention—and Bank Directors Retreat. The events will be held October 23-24 and 24-25, 2019, respectively at the DoubleTree Hilton Downtown Nashville. This updated Community Banking event is focused on one goal—to provide the tools that Tennessee banks need to thrive in the ever-evolving community banking landscape. The Independent Board of Directors additionally serves as the Board of Trustees for The Southeastern School of Banking, the premier two-year general banking school for bankers in Tennessee and the midsouth.

You have long stressed the important role the Independent Division can play in preserving the community banking model. As a result, the 2019 program has been geared specifically to address the tools needed to maintain independence. What do you see as the biggest challenges, and where do the opportunities lie?

Community banks are the engines that fuel the economic activities of most rural communities that are typically not attractive to larger institutions. The increasing rate of acquisitions and consolidations, fueled by the growing federal regulatory burden, could potentially reduce banking options to rural consumers and small businesses. However, with the tools and educational offerings provided by TBA, smaller institutions have the opportunity to be more flexible and adaptable to changing customer preferences.

Your introduction to the banking industry was through Jim Clayton, who you worked for during college. What principles did you learn from Jim that shaped you as a leader today?

I’m very grateful for the time I spent learning from one of Tennessee’s most brilliant business minds. Most folks don’t know that in addition to Mr. Clayton’s tremendous business success in finance, manufacturing, retail, insurance, and property management, he is also an electrical engineer, jet pilot, and attorney for over 50 years. Mr. Clayton taught me to never stop learning or sharing with others what I have learned.

Apex Bank serves largely rural markets in each Grand Division. What do you view as the greatest challenges facing rural Tennessee, and what role can banks have in helping to address those?

The lack of employment and educational opportunities in rural markets has forced much of our younger talent to relocate to larger urban areas. Our community banks can help foster rural growth by providing financial education, teaming with small business owners, and partnering with local schools and resource centers to provide new opportunities in our communities.

Apex Bank states that they are ‘progressively looking for ways to re-invent banking for our customers and the communities we serve.’ What do you see as the next big adaptation that banks will eventually have to make but haven’t yet fully embraced or implemented in a widespread fashion?

We’re focused on developing alternative delivery strategies outside of the traditional brick and mortar branch, whether through expanded digital banking or the adoption of ITMs (Interactive Teller Machines). Traditionally, banks have been slow to react to technological advances due to the increasing regulatory burden and financial constraints, opening the door for non-bank fintechs to compete for market share. We must find more efficient methods of delivering banking services to our customers in order to compete with our new and mostly unregulated competitors.

The Independent Division Board serves as the Board of Trustees for The Southeastern School of Banking (TSSB). Why do you think TSSB, and other continuing education such as Graduate School of Banking at LSU, is an important component for bankers that wish to advance in the industry?

The rapidly changing banking landscape makes continuing education a key requirement for anyone expecting to advance in this industry. The TSSB has done an exceptional job updating and expanding its offerings to provide banks with a terrific value proposition in education. At Apex Bank, we have seen remarkable growth in our team members that have attended TSSB. Attending the Graduate School of Banking at LSU was essential to advancing my own banking knowledge and career. I encourage every bank to send at least one or two individuals to TSSB and LSU each year, because I know your organization will easily be repaid for its educational investment.