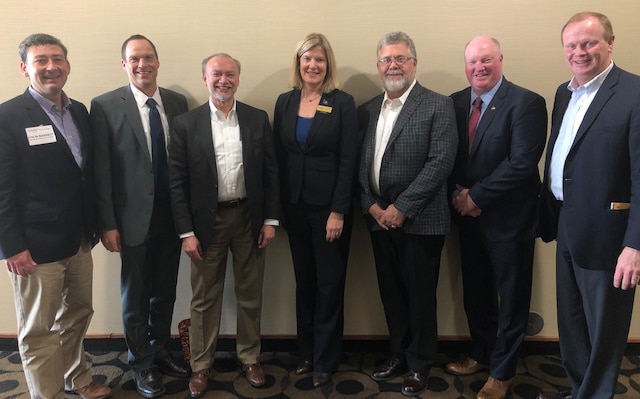 In November, TDFI Commissioner Greg Gonzales, First Community Bank of Middle Tennessee’s Scott Cocanougher, and TBA President Colin Barrett were invited to speak to a group of bankers, appraisers, federal regulators and industry leaders in Bismarck, N.D., regarding efforts made in Tennessee to address the appraisal challenges many banks are facing. Recently the state of North Dakota was granted a waiver from certified appraisals for one year.

Working with Congress and the multitude of federal agencies that oversee our industry requires a lot of determination and significant patience. With opposing viewpoints and entrenched bureaucrats, nearly all the momentum tilts in favor of maintaining the status quo.

Unfortunately, that often leaves important issues languishing for years, if not decades. From credit unions to the national rate cap to modernizing BSA/AML, any empowered group of objective observers could address these in a matter of minutes. But that is not how Washington works, so we continue to push on the issues in Congressional districts and in D.C.

This process has caused me to fully appreciate the work being done by bankers in Tennessee and across the country to address appraisal challenges many of our communities are experiencing.

In 2017, amid rising appraisal costs and delays in turnaround time, TriStar Bank applied for a waiver from the Appraisal Subcommittee of the FFIEC. The waiver request, the first of its kind brought in decades, was denied despite overwhelming evidence justifying its necessity.

As a result of the discussions the request generated, Commissioner Greg Gonzales brought together bankers and representatives from the Tennessee Real Estate Appraiser Commission to look at ways to address challenges faced by both industries. Bankers, including Ted Williams, Scott Cocanougher, David Barnes, and Chris Jernigan, met with appraisal leaders to discuss how to overcome these challenges and improve the process for both parties.

As a result of this dialogue, the TBA hosted its first Appraisal and Banking Conference this past October. We looked at ways to enhance communications, improve turnaround times, and have a better understanding of the challenges each industry faces.

Meanwhile, over the past year, the state of North Dakota was applying for its own waiver from appraisal licensing requirements. Their 105-page application, signed by Gov. Doug Burgum and North Dakota Banking Commissioner Lise Kruse, passed the committee on a 5-2 vote. Swaying the committee was a decrease in the number of appraisers, a 12% increase in the state’s population, and up to three-month turnaround times for appraisals to be conducted.

One of the requirements placed on North Dakota in return for the waiver was to conduct a joint meeting between bankers and appraisers, similar to what had occurred in Tennessee. As a result, Commissioner Gonzales, Scott Cocanougher, appraiser Rex Garrison, and I were invited to Bismarck to speak at the conference on what we have learned throughout the process. Also attending this meeting were representatives from the ICBA, CSBS, and the Appraisal Subcommittee.

While tensions were certainly high, the Tennessee delegation helped break the ice by demonstrating our efforts in working together. We discussed the challenges that appraisal management companies posed for many appraisers, the lack of communication between our industries, and the changes set forth by Dodd-Frank.

As the dialogue opened up, many appraisers spoke of their challenges: Driving hours to a job that would only result in a $350 payment, restrictions that would not allow an apprentice the opportunity to conduct the appraisal, and communication restrictions that were placed on them by appraisal management companies.

There is much work to be done to strengthen the ability for banks to get timely, affordable appraisals conducted. But even more importantly, there is momentum with North Dakota hopefully being just the first of many states to replicate our efforts to bring bankers and appraisers together to address these important issues.