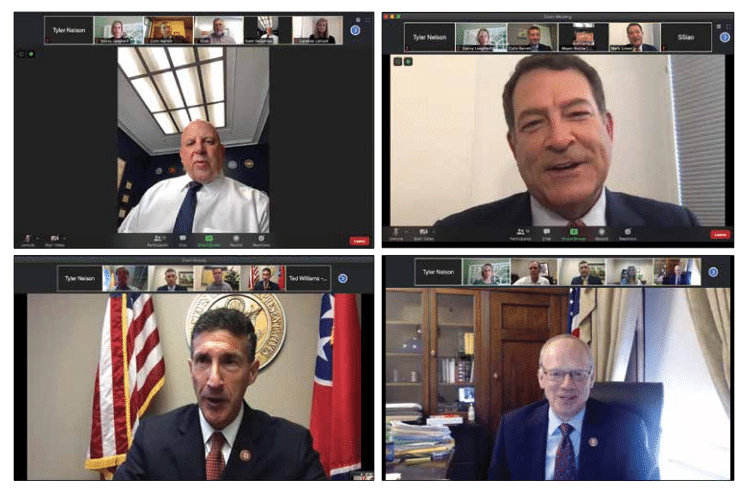 As I look back on the challenges the banking industry has overcome in 2020, I am incredibly proud of bankers’ flexibility and adaptability. I give a lot of credit for this to their ability to embrace new technology and ways of conducting business. If it weren’t for Zoom and WebEx—two things I had never used until a few months ago—the challenges thrown at us in 2020 could have been insurmountable.

Being able to conduct meetings, conferences, and seminars virtually allowed us to operate without missing a beat. Although I miss seeing everyone face-to-face, connecting virtually is better than not seeing them at all. I’ve often wondered how we could have gotten through a similar pandemic 10 or 20 years ago when virtual meeting platforms did not exist.

One important event those virtual options enabled at a critical time for the banking industry was TBA and ABA’s joint Virtual Washington Conference. Throughout the week of September 21, TBA staff and bankers across Tennessee and the southeastern states participated in a series of virtual meetings with the heads of federal regulators agencies, including the FDIC, OCC, CFPB, Federal Reserve, Treasury and SBA.

To have the virtual face time with these leaders allowed bankers and the participating state associations to discuss critical issues like PPP forgiveness, increasing banks’ regulatory thresholds, and CRA modernization.
To hear FDIC Chairman Jelena McWilliams speak optimistically about the likelihood of at least a temporary increase in banks’ regulatory asset thresholds provided much needed reassurance to bankers that making PPP loans to businesses would not result in unexpected regulatory repercussions for them.

Both the FDIC and Federal Reserve acknowledged the need to update CRA regulations, especially in light of the OCC’s rulemaking on this in May. The industry advocated for clarifications on what activities qualify for CRA credit and adoption of quantitative measures of CRA performance that reflect the diversity of bank models, products and markets. A unified, interagency regulation will be the key to a CRA framework that stands the test of time.

SBA and Treasury officials also provided a sounding board for bankers’ most time sensitive priority – streamlining PPP forgiveness for loans under $150,000. SBA’s response could be summed up as a finger pointing toward Congress because, in their opinion, they do not have the authority to grant forgiveness without legislative change to the CARES Act. Another issue, brought by Tennessee banker Emily Gray, was SBA changing their position on EIDL funds and making PPP borrowers repay their EIDL advance. This not only penalizes banks by making the amount of an EIDL advance a repayable 2% loan, it penalizes the businesses who received them. Again, SBA’s response was that to change this, Congress would need to take legislative action.

With those issues top-of-mind—PPP forgiveness and EIDL—they provided great talking points for the Congressional meetings TBA also hosted the week of the Washington Conference. Bankers across the state met virtually with Congressmen Kustoff, Cooper, Fleischmann, Rose, DesJarlais, Burchett, and Green. These meetings also provided an opportunity to thank each Congressman for his efforts and the tremendous efforts of their staff during the pandemic to help banks deploy the PPP and advocate for needed changed in the program, including streamlining forgiveness for small loans.

In addition to the Washington Conference visits with regulators and our Congressional meetings providing an opportunity to advocate for needed changed, our regulators and Congressmen also thanked bankers for what they’ve done during the pandemic to help their customers and communities. Bankers’ efforts have not gone unnoticed—in their communities and in Washington.