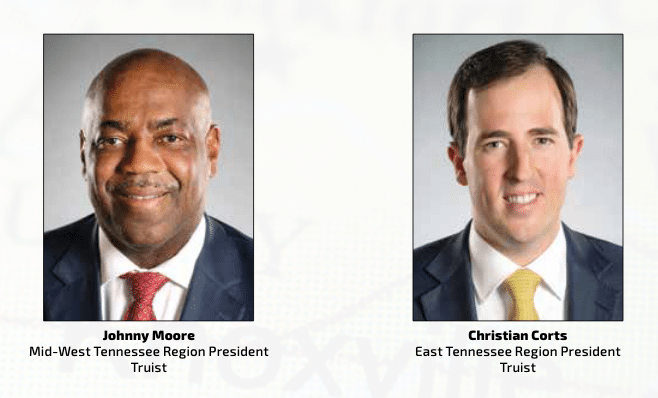 As the end of 2019 approached, SunTrust Memphis Regional President Johnny Moore and BB&T Tennessee President Christian Corts were in communication with each other as the blockbuster merger creating Truist neared completion.

The deal creating the nation’s sixth largest bank received regulatory approvals November 19, 2019, and was completed December 6, clearing the way for Moore and Corts to jump into the details about building their teams in Tennessee and discuss specifics about clients.

They have been working closely on a regular basis ever since. Today the combined company has 153 branch locations in Tennessee with about 2,000 teammates.

“Johnny and I are in lockstep,” Corts said. “We are talking on a daily or every-other-day basis, and it has been extremely positive for me having Johnny as a peer locally. He is a wealth of knowledge and is a great partner.”
“Christian and I work really well together,” Moore said. “Early on, it was important for us because he helped me understand BB&T’s community-based banking model, and I helped him understand the capital markets and industry-specialist aspects of SunTrust. We worked together to really cement how we were going to be seamless in the execution for what we’d been charged with in Tennessee.”

Moore and Corts, who join 22 other regional presidents in the bank’s 14-state footprint and Washington, D.C., talked enthusiastically about what each of the two legacy banks have brought to Truist, both in terms of service lines and talent, and about their “shared purpose.” The two regions’ teams, they say, were put together based on the best people without regard to which legacy bank they were with.

COVID Curveball
After the December closing, Corts said, the regional teams kicked into high gear to build chemistry and establish an organizational foundation for the road ahead as Truist. “We were going 100 miles an hour for a couple of months and then COVID hits,” he said.

“So we went from getting to know each other in separate facilities and different buildings to then everyone working from home. That was definitely a challenge, and it was something I was really anxious about. The interesting thing, though, is I almost feel it brought us together at a faster pace.”

Corts and Moore both agree that the PPP process was what really cemented the SunTrust and BB&T team members together. “It forced us to become one team with a common purpose faster,” Corts said.

“At that point, we forgot about heritage SunTrust and heritage BB&T,” Moore said. “We were just trying to take care of the bank’s customers. Everybody took off their jersey and put on a Truist jersey. We were working extremely hard, and it forced us to work closer together. When you are working that hard for a common purpose, the ‘me’ disappears and it becomes ‘we’ pretty quickly.”

The integration and rebranding of SunTrust and BB&T into Truist will continue occurring in phases over the next several months. The bank recently completed the integration of the corporate and investment banking businesses that now operate as Truist Securities. And in September it announced the launch of Truist Ventures, a corporate venture capital division created by integrating investments in technology companies from the heritage SunTrust brand with BB&T Ventures.

The integration of the branch network and the system conversion, which will be a new hybrid of the SunTrust and BB&T systems, is yet to come, with the core bank conversion expected to occur in the first half of 2022.
“We are not going to flip the switch until we know we are 100% ready,” Moore said. 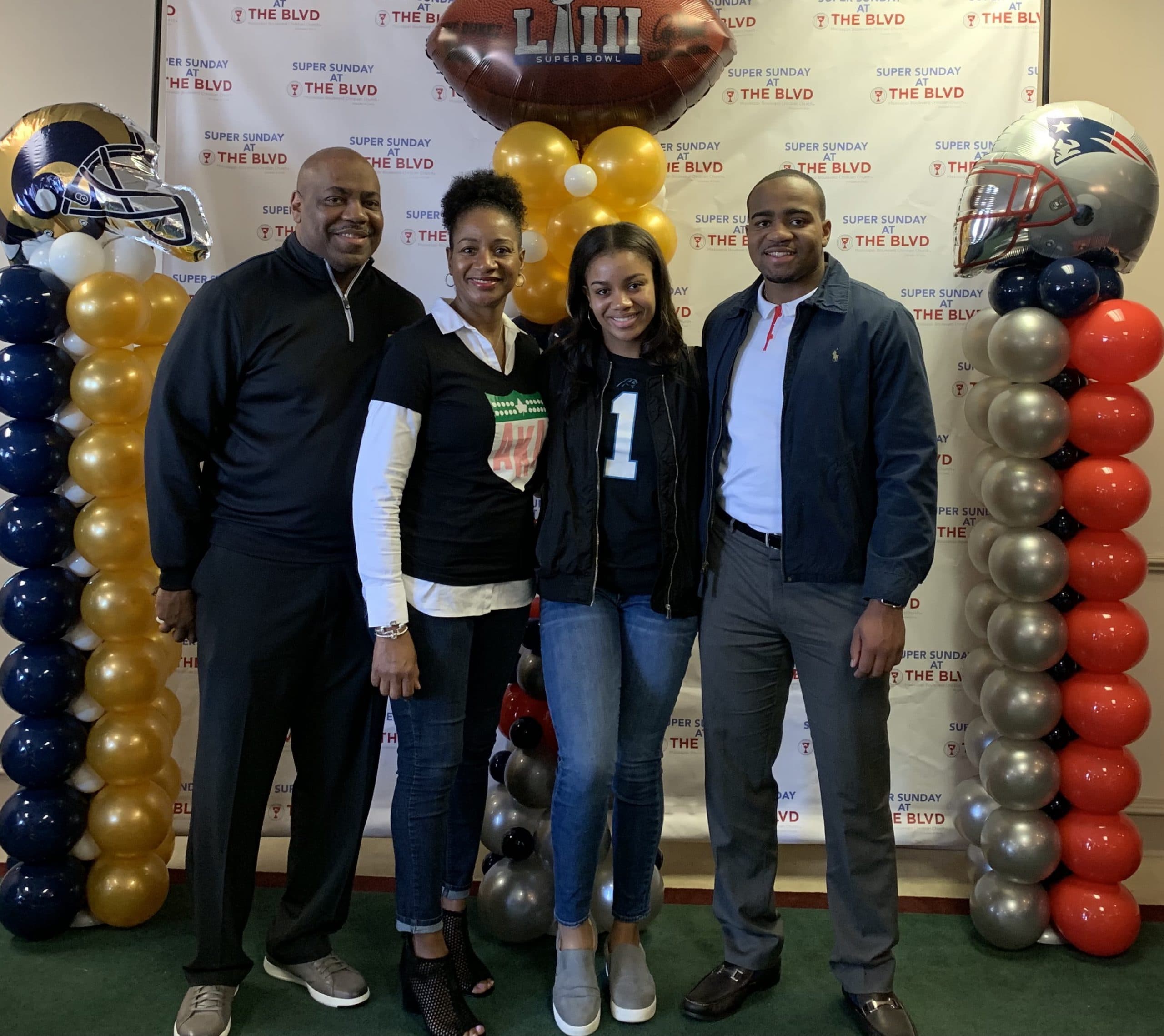 For Johnny Moore, football and the mentorship of a college professor put him on a rewarding and successful career path, from being an accountant at Ernst & Young in Memphis to one of 24 regional presidents for the nation’s sixth largest bank.

“I grew up an inner-city kid in Memphis, the middle of five children in a working class family. I was a big kid, so I gravitated toward football and played offensive tackle and defensive end at Melrose High School. A lot of people know Melrose High School. It’s famous for a lot of athletic achievements, but they also produce a lot of fine scholars,” Moore said. “That led me to Rhodes College, where I played defensive end. Rhodes was the first private school I went to.”

In 1988, Moore became the first member of his immediate family to graduate from college. He didn’t have a specific career goal in mind at Rhodes, but he decided to major in business. “I took an accounting class and did well. One of my professors who was my faculty adviser, Sue Legge, advised me to major in accounting. She thought I was a good kid and could do something special, and she took a real interest in me.

“I told her I thought I could do well, but I was concerned because there weren’t a lot of African Americans in banking and accounting. She made sure she opened the doors and helped me show I had the skill set and capabilities. I got two offers and went to work at Ernst & Young.”

While there, Moore determined he needed to solidify his job security, so he took the CPA exam. “I passed the exam in one sitting, all four parts. I knew that was a big thing at Rhodes. So that was my present to Ms. Legge for all she poured into me.”

When Moore got an offer to join FedEx, National Bank of Commerce, one of his audit clients, caught wind he was leaving and asked him to join the bank as its CRA officer. He did and his banking career was launched.
After SunTrust acquired NBC in 2005, Moore held numerous management positions in the commercial compliance and mortgage banking areas before being named SunTrust’s Memphis market president.
Since the beginning of the year, Moore has held “dual citizenships” in Nashville and Memphis, and he and his wife, Merry, rotate weeks in each city. “We’re empty nesters now, so that makes it easier,” said Moore, whose son, Trey, graduated from the University of Richmond, where he played football, and his daughter, Madison, is a sophomore at the University of Tennessee in Knoxville.

On management style
“I’ve learned you can’t manage everybody the same way. I’d say I’m a player’s coach. You’ve got to assess your teammates, understand how you can help them succeed and give them the tools and flexibility to do the job. I try to help each teammate understand their role in the overall game plan and the importance of them executing so we as a team succeed.”

On personal time
“I like playing golf. I used to be pretty decent, but my game is not that good right now. Traveling between Memphis and Nashville doesn’t allow me much time to play. As an athlete, you need some type of outlet, and I can’t play basketball anymore without creating a hospital bill.” 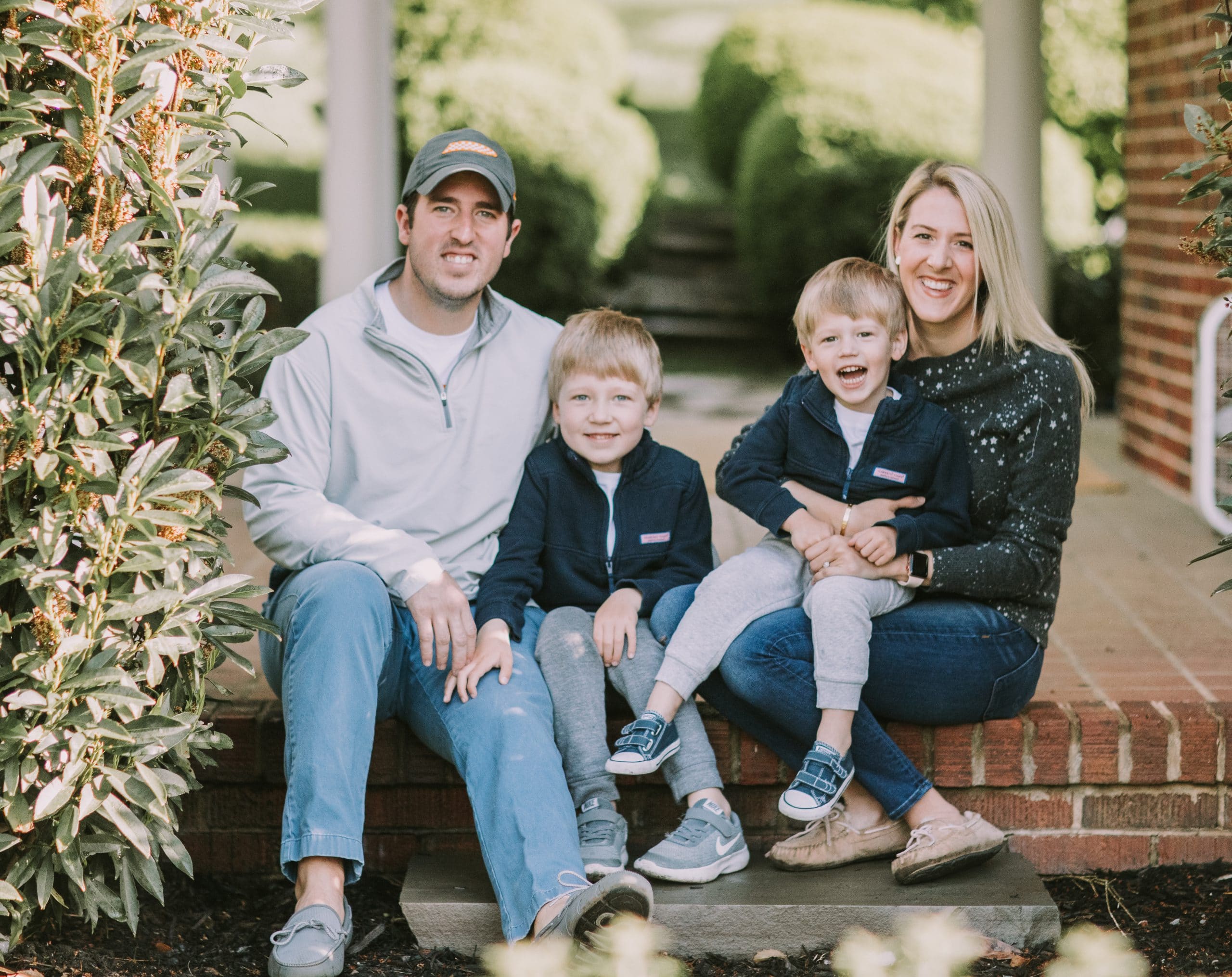 At a young age, Christian Corts came to enjoy the idea of business and the concept of solving problems that provided mutual benefits—although some of his early forays into entrepreneurship may have been a bit one-sided.

“My mom tells the story of when I was four going door-to-door selling my drawings and coloring pages,” Corts said with a smile. “At Christmas parties, I would collect all the desserts and sell them for a quarter a piece.”
He was also instilled with the idea of serving the community. His father is a third-generation Baptist minister and his mother a school teacher. “They taught me through their actions and through the way they dedicated their lives. In every environment I was growing up in, my parents were serving others.”

Corts was born in Kentucky while his father was in seminary, and the family then moved to Charleston, S.C. and later to Greenville, S.C., where he spent most of his time growing up. While attending Samford University in Birmingham, Corts interned with BB&T in North Carolina his junior and senior years in their mergers and acquisitions group.

“I was really drawn to the culture of BB&T,” Corts said. “Everything they did was purpose-oriented. The experience redefined my childhood idea of business being only about mutual transactions benefitting two parties to including what role you can play in affecting the greater good of society.”

Corts joined BB&T after graduating in 2008 and quickly began moving up the management track as a commercial finance specialist, corporate banker and corporate banking manager. His stops included Winston-Salem and High Point, N.C., Houston—where he helped establish BB&T’s Texas presence in 2011—and then to his hometown of Greenville. In 2018, at age 32, Corts was named Tennessee president, becoming BB&T’s youngest regional president.

With his wife, Katie, and two young sons (ages 6 and 3), Corts feels settled in Knoxville and empowered by the opportunities resulting from the merger, especially in terms of purpose.

“To me, banking is one of the most noble professions you can have. We’re helping people create jobs; we are helping people achieve their financial dreams. It’s what is at the heart of banking. As an industry, we need to do a better job of educating folks coming out of school and into the workforce about what a great option it is.”

On management style
“I’m highly focused on the team’s beliefs about our purpose and mission or the “why” behind what we do. I believe that helping to shape the appropriate beliefs will drive the right behaviors, which will then create the desired results.”

On personal time
“With two young boys, my interests have quickly become whatever their interest is. But I decompress in the kitchen. That’s my stress-relief and creative outlet. Go-to recipe? My wife would love that question. She is always asking me to remake dishes, which is tough since I don’t use recipes or write anything down. I’d say my go-to is a Charleston-based, low-country approach."